Dynamic and inspiring concert in which the versatility of the guitar in different rhythms of Brazilian popular music is masterfully interpreted by Rogério Bicudo.

Bicudo presents a program in line with the musical heritage of fellow countrymen Villa-Lobos and Jobim, timeless music in which the boundaries between traditional and classical music merge in a very natural way.

Guitarist, composer Rogério Bicudo combines the precision and technique of chamber music with the rhythm and passionate force of popular music.

Guitarist Rogerio Bicudo has chosen this repertoire selectively from the work of the best Brazilian poets and composers.

This program around the music of three of those great composers, Tom Jobim, Chico Buarque and Edu Lobo, is a selection of works that represents the depths of all his acquired musical knowledge of Brazilian Popular Music (MPB, Música Popular Brasileira). Bicudo is also in his element playing and singing, perfectly synchronised.

We listen to a lyrical rendering of enormous melodic power and harmonic richness in a captivating combination of familiar repertoire and lesser-known masterworks.

You are invited on a pleasant musical journey through Samba and Choro, the music of Rio de Janeiro par excellence. Bicudo displays a style that descends directly from the tradition of the great masters of choro and samba of the past.

With a very unique, extremely rhythmic and melodic sound, he is an artist internationally recognized for his talent in the music scene that has been presenting with excellence in Brazil and abroad the best of Brazilian music, instrumental and vocal for decades.

Rogério is also a composer of samba, choro and other styles of popular music, his music has been recorded by artists such as Zeca Pagodinho and Ivan Milanez, Eduardo Gallotti, Casuarina and Criolo.

In Amsterdam, where he lives, he founded and presides over the Clube do Samba de Amsterdam, a foundation with the aim of promoting this often misunderstood musical genre.

The recently formed Duo Atlântico was idealized by Rogério Bicudo and Daniel Montes, musicians from Rio de Janeiro, based in Amsterdam, whose repertoire is an ode to the guitar.

The interaction of the six- and seven-string guitars of this duo derives from a very special musical idiom in which the boundaries between classical and popular music merge in a very natural way.

Duo Atlântico combines its own compositions with the heritage of timeless musical traditions, navigating the rhythms of the ocean that gave it its name.

A true journey across the Atlantic with a rich variety of sounds and timbres in an intense and authentic interpretation.

Trio Curare is a vibrant and dynamic trio based in Amsterdam with fantastic singing musicians in a beautiful interplay.

Bicudo joins forces with the great singers Laura Polence from Latvia and Magali Datzíra from Barcelona and as Trio Curare they perform their original compositions and give it’s own jazzy twist to Brazilian music playing masterfully and creating adventurous vocal arrangements.

Their musical and human complicity is evident both in their choice of repertoire and in the contagious pleasure that they have playing together.

Trio Curareperforms as well in an extended version with guest musicians.

Link to the page: facebook.com/TrioCurare

ROGERIO BICUDO & MICHAEL MOORE
Rogerio Bicudo and Michael Moore, two very experienced musicians with different musical backgrounds. They have been playing together for thirty years and share a common feeling for the warm atmospheres, swinging emotion and rhythmic richness of various musical traditions. Both Bicudo and Moore bring a very rich musical biography of their own.

Clarinetist /alto saxophonist Michael Moore is internationally acclaimed for his beautiful tone and rich musical fantasy and knows like no other how to bridge the gap between traditional and improvised jazz. He combines the finesse of American Jazz, the anarchy of the New Dutch Swing and the quirkiness of folk music from all over the world. Among other things, Moore won the prestigious Boy Edgar Prize. He also teaches at Conservatorium van Amsterdam and Groningen.
Facebook: https://www.facebook.com/rogeriobicudoguitar

THE PRESS ABOUT BICUDO'S PROJECTS

“ ..The interplay between Michael Moore's reed work and the shimmering fretwork of Rogerio Bicudo is instinctual and immediate, as they wend and waft their way through these melodies with alacrity and grace, challenging the rhythm..” 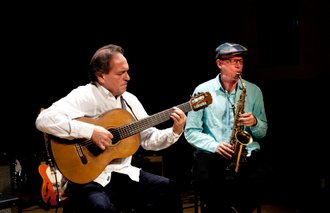 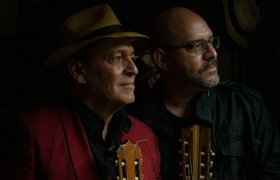